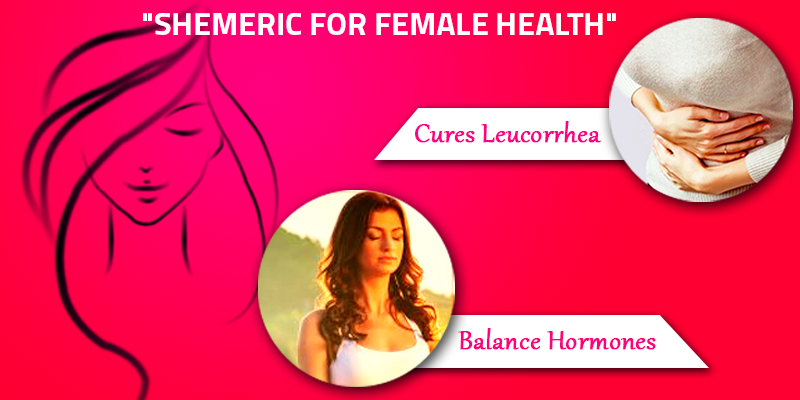 Female health concerns are not limited to health problems that are specific to female organs such as ovarian cancer or vaginitis. Certain diseases are more prevalent in women than men. This article is focused on how SHEMERIC that is rich in curcumin boosts female health including female reproductive health problems as well as diseases which affect women more than men.

Read How Shemeric that is Rich in Curcumin Boosts Female Health

We have put together a list of the most common diseases that affect women and how curcumin can help in each of these health conditions.

Premenstrual syndrome is a number of symptoms that occur prior to a woman’s menstrual cycle. It includes depression, pain, gastric symptoms etc.

Researchers concluded that curcumin’s anti-inflammatory property and ability to regulate brain chemicals brought about this effect. Traditionally turmeric is also said to help in regularizing menses.

Vaginitis is an inflammatory and infective condition that affects the vagina. Curcumin can inhibit the growth of bacterial and yeast infection that cause vaginitis.

Curcumin is also a potent anti-Candida agent and has strong anti-inflammatory property.

Few of the other common female reproductive health problems in which turmeric can help are uterine fibroids and PCOS.  Menopause is a natural change in female health marking the end of her reproductive ability. It is marked by hormonal changes, hot flashes, depression, weight gain, impairment of bone health.

Turmeric is a natural phytoestrogen which may help ease out hormonal imbalances in menopause. It also works an anti-depressant, preserves heart and bone health and also aid in weight management.

Turmeric Is A Powerful Anti-Cancer Agent

Few cancer types other than those that affect specific female organs are more prevalent in women than men.

Similarly curcumin plays a preventive as well as chemotherapeutic role in lung cancer; it also prevents lung cancer from metastasizing.

Curcumin is found to be therapeutic in triple negative breast cancer. It exerts anti-tumour and anti-cancer effects in breast cancer and also is recommended as an adjuvant to conventional breast cancer therapy.

Overall curcumin has potent anti-cancer activities, in fact it manipulates over 20 biomolecular targets to cause cell death in cancer cells. This activity of curcumin can be helpful in treatment of any cancer.

Topical application of turmeric is also found to be beneficial in external cancerous lesions and cancer of the vulva.

Curcumin is found to increase bone mineral density and protect bones from mineral loss occurring as a result of menopause.

Rheumatoid arthritis is an autoimmune disorder that affects the joints and leads to pain and swelling in the joints.

Dietary turmeric as well as supplement is found to be therapeutic in experimental rheumatoid arthritis as it prevents joint degradation and inflammation.

Turmeric is more effective in reducing tenderness and joint pain in patients suffering from rheumatoid arthritis.

Atherosclerosis is when blood lipids forma plaque and clog the arteries.

Stroke is a condition which occurs when blood supply is cut off to the brain. Turmeric protects the brain in stroke like conditions.

SHEMERIC reduce frequency of heart attacks in patients who have undergone heart surgery.

Curcumin also initiates repair and protects heart from dysfunction occurring as a result of heart attack.

Turmeric Is A Natural Antidepressant

Women are twice likely to be diagnosed with depression than men.

Hormonal changes, premenstrual issues, pregnancy and postpartum depression are few factors that cause mood changes in women. These factors can affect the brain chemicals that control the mood.

Curcumin has anti-depressant and anti-anxiety properties which can be effective in treatment of depression in women naturally.

Curcumin by virtue of its antioxidant nature acts as a  kidney protective agent.

Curcumin aids in treatment of various kidney disorders like diabetic nephropathy, chronic kidney failure and kidney toxicity occurring as a result of various medicines or compounds.

Urinary tract infection is a common complaint in women. It is characterised by burning sensation during urination, cloudy, dark or strange smelling urine and frequent urge to urinate.

Curcumin has a broad spectrum anti-microbial property.
Turmeric is effective in clearing out bacteria that cause urinary tract infection. It is also has kidney protective agent which safeguards kidney from disease and damage.

It presents with symptoms like abnormal vaginal discharge, inflammation in the genitals, rashes and sores etc.

Shemeric that is rich in curcumin boosts female health from all such diseases mentioned above naturally. To buy Shemeric, click here.