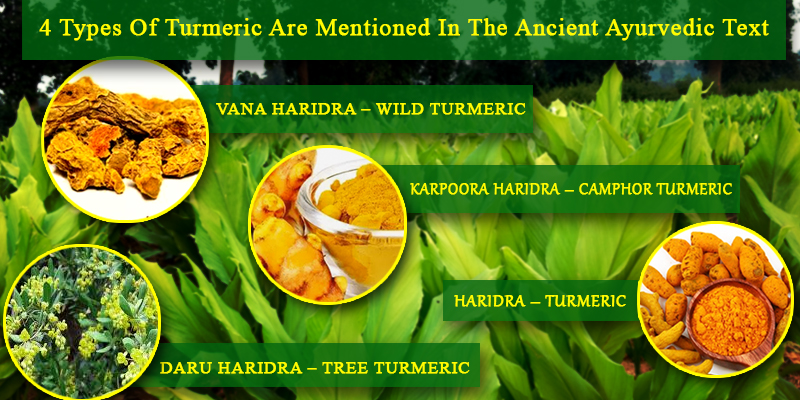 Turmeric also is known as the “INDIAN SAFFRON” has been n integral part of our lives since 4000bc. In Sanskrit; it is referred to as haridra, meaning, one that adorns the body of the omnipotent, all-powerful Hindu deity, Hari, Lord Vishnu. Turmeric is referred to by 55 synonyms in the Vedic texts, each denoting its auspicious quality, like.

KRIMIGHNI, for killing worms, as a potent anti-microbial.

HRIDAYAVILASINI, described as, giving delight to heart or charming.

SHOBHNA, brilliant, as the brilliant colour, and qualities.

The above names are just a few drops from the ocean of goodness, this arguably, the most powerful herb on this planet has. In Ramayana, turmeric is listed amongst eight ingredients, to be mixed in water to perform the arghya ritual. Arghya ritual comprises of washing the feet, of venerable guests like the rishis, learned Brahmins and devatas.

Numerous Vedic and Puranic texts refer to turmeric, as Sri Surya’s, the herb of the sun god. Four types of turmeric are mentioned in the ancient Ayurvedic texts (BHAVAPRAKASHA NIGHANDU) compiled in the 14th century.

Turmeric is regarded as extremely auspicious in Hindu culture and is used as a holy entity in many Indian rituals and prayers. This magical spice, enjoys a special significance, in Vedic astrology and is thus said to posses multitudinous astrological powers. Spiritually, turmeric is used to balance the energies of the body, while medicinally it is well known, as an anti-inflammatory, anti-bacterial, antiseptic, digestive, anti-oxidant and diuretic agent. Turmeric is associated with the goddess of fertility Uma. Therefore the deep association, with fertility and prosperity, it is used during the Haldi ceremony at Hindu weddings. The application of turmeric, not only enhances the glow, it signifies the ritual purification, of the new couple and serves as a blessing of fortune and prosperity, Its calming effect is also intended to dispel any nervousness. Popularly referred to as, Bandara, in Maharashtra, turmeric is the main offering, to the popular god, Khanoba. It takes place specifically during the Bandara festival, where families pray for marital bliss and prosperity.

Goddess Durga’s face is known to emit the radiant turmeric glow, establishing her divine status. Turmeric is associated with Lord Krishna, who is depicted as wearing yellow. Certain Ganesha idols are made entirely of turmeric. Turmeric water, as an offering to goddess Kali, is an important ritual. To appease the planet Jupiter in your birth chart, turmeric root is tied on the neck or wrist on Thursdays, a turmeric tika applied on the forehead lends calmness to the mind.

In Vedas, turmeric is also referred to as VAYOSTHAPAN, which means it arrests ageing and it creates more OJUS (vitality) in your system. Thus this potent herb has remained a central cosmetic since ancient times. The dexterous spice, made its journey into the west, through the Mediterranean region. In the middle ages, in Europe, it was known as the Indian saffron and the salt of the Orient, while in earlier biblical times it was used as a perfume as well as spice.

This super spice of life, turmeric’s medicinal value was systemized in CHARAKA SAMHITA or compendium of caraka, Sanskrit text on Ayurveda. Today turmeric is classified as one of the top 20 herbs, that revive our health, speaks volumes about its abundant timeless benefits. With the world recognizing the benefits of its heavenly goodness, it will soon be the only natural weapon to combat the deadliest of diseases naturally and continue to add laurels to its already illustrious history.