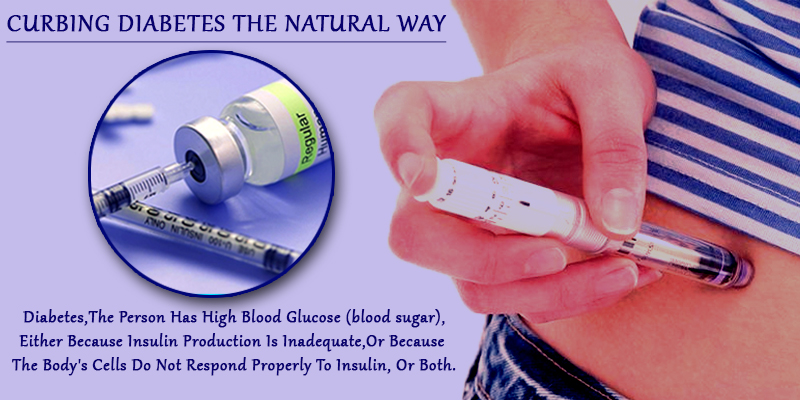 The alarming rise in the number of people with diabetes in India is an eye-opener for us all. Especially type two diabetes, which normally afflicts older adults has now been observed to beset younger Indians over the last decade. This can be attributed to the lifestyle of the Urban Indian. Three out of five doctors say that ‘unruly lifestyle’ is the major cause for India becoming the diabetic capital of the world.

Latest data from the Indian Council of Medical Research’s (ICMR’s) youth diabetes registry shows that one in every four (25.3%) people under 25 with diabetes in India has adult-onset type-2 diabetes, which, by definition, should strike only older adults with a family history of diabetes, obesity, unhealthy diets and inactivity.

Here Are Some Disturbing Facts About Diabetes In India:

– With 72.9 million people currently living with diabetes, India is known as the world capital for the disease.

– And around 47.3% of India’s 72.9 million diabetics are undiagnosed and do not know they have high blood glucose level.

–  According to an estimate, the diabetic population in India is expected to grow up to 134.3 million by 2045.

– As per a survey conducted by diabetes care company Novo Nordisk India, over 60% urban Indian women at risk of diabetes.

– Data from the Institute of Health Metrics & Evaluation shows diabetes emerged as India’s seventh biggest cause of early death in 2016, up from 11th in 2005.

-According to the study conducted by Indian Council of Medical Research, 63.9% of Indian youth below the age of 25 has type 1 diabetes and 25.3% have type 2 diabetes.

-A 2013 report by the National Program for Prevention and Control of Cancer, Diabetes, CDV and Stroke (NPCDCS) showed that South Indians are more vulnerable to diabetes and pre-diabetes than their North Indian counterparts.

– Several studies have shown south Asians, including Indians, develop diabetes a decade earlier than Europeans at a lower weight, and those with prediabetes progress to overt diabetes at a faster rate.

–  It is said that Indians get diabetes at a lower body weight, with around 20-25% diabetics not being overweight.

– While the cost of diabetes treatment in India has witnessed a substantial escalation in the past few years, a report by Pricewaterhouse Coopers estimates that the country’s total bill for treating the condition would reach US$30 billion by 2025 – going by current treatment costs.

Diabetes, medically referred as diabetes mellitus by doctors, describes a group of metabolic diseases in which the person has high blood glucose (blood sugar), either because insulin production is inadequate, or because the body’s cells do not respond properly to insulin, or both.
Patients with high blood sugar will typically experience frequent urination, intense thirst and hunger, weight gain, unusual weight loss, fatigue, cuts and bruises that do not heal, male sexual dysfunction, numbness and tingling in hands and feet.

A Quick Overview Of The Types Of Diabetes:

High blood sugar in type 2 diabetes is due to a condition called insulin resistance, and a corresponding drop in insulin production. These two factors are what make type 2 diabetes different from type 1 diabetes, gestational diabetes, and other types of diabetes.

Insulin — The hormone that allows your body to regulate sugar in the blood — is made in your pancreas. Essentially, insulin resistance is a state in which the body’s cells do not use insulin efficiently. As a result, it takes more insulin than normal to transport blood sugar (glucose) into cells, to be used immediately for fuel or stored for later use. A drop in efficiency in getting glucose to cells creates a problem for cell function; glucose is normally the body’s quickest and most readily available source of energy. As the body becomes more and more insulin resistant, the pancreas responds by releasing more and more insulin. This higher-than-normal level of insulin in the bloodstream is called hyperinsulinemia.

Insulin resistance sends your pancreas into overdrive, and while it may be able to keep up with the body’s increased demand for insulin for a while, this ability wanes. And when it does, your blood sugar levels will elevate — leading to pre-diabetes, the precursor of type 2 diabetes, or type 2 diabetes itself.

A healthy lifestyle which primarily includes being physically active and eating healthy can help to a large extent .And of course, adding a touch of curcumin in your daily routine will help you in more than one way. Curcumin is a naturally occurring compound in Turmeric which gives it the yellow color. It is considered one of the most beneficial compounds from turmeric that dates backs to 5000 years back. It was a principal healing agent in Ayurveda and traditional Indian system of medicine. Curcumin is an anti‐oxidant and nuclear factor kappa‐B inhibitor. A number of studies have shown that dietary curcumin reduces inflammation and delays or prevents obesity‐induced insulin resistance and associated complications, including atherosclerosis and immune mediate liver disease. Curcumin has been shown to regulate numerous transcription factors, cytokines, protein kinases, adhesion molecules, redox status and enzymes that have been linked to inflammation.

Pure unadulterated, organic and chemical-free Curcumin is what will aid you in diabetes. In today’s world where every single thing is chemical-laden, it is difficult to find pure curcumin, the way nature meant it to be. Sugeric is a product of Bagdara Farms, a brand that lives up to its claims of organic, chemical and pesticide-free products. It has high levels of Curcumin which aids in balancing the sugar levels.

Diabetes is treatable and when it is done the natural way, there are no repercussions. It’s time to take the first step now. What follows will be nothing short of a happy journey.