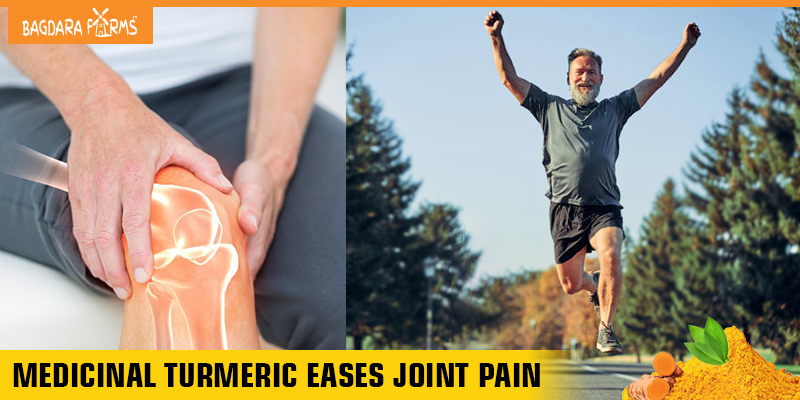 As spices go, it’s pretty hard to ignore Turmeric. Its intense colour undoubtedly stands out on the spice shelf.

Its wonderful anti-inflammatory properties also make it a popular dietary addition. From being limited to just milk, Turmeric has gracefully walked its way into our teas, smoothie, salads, wound creams, plus beauty routines like face masks and much more.

Curcumin is a major component of medicinal turmeric, and one of its most biologically active compounds. Both turmeric and curcumin are marketed as powerful antioxidants with zillion anti-inflammatory properties.

These are the factors that make turmeric not just a spice but a medicine, which is therapeutic without causing any side effects.

Turmeric traces its roots back in history as a spice and is used both orally and topically, to treat bruises and wounds, in traditional medicine in Southeast Asia, China, and India.

Its historical past, its natural appeal, and medicinal potential make the very therapeutic turmeric an attractive choice for diseases & ailments.

What Does The Research Say?

Medicinal turmeric is enriched with anti-inflammatory and anti-oxidative properties, among other 800+ pharmacological abilities.

Researchers have been constantly highlighting curcumin.

Which makes up approximately 5 percent (varies from root to root) of turmeric by weight.

Besides joint pain/arthritis, curcumin is being hailed as a cure for disorders like:

(6) A fertility booster, and many more.

Medicinal Turmeric Eases Joint Pain! Believe It Or Not

A discover magazine article did mention that, in a recent clinical trial printed in Annals of Internal Medicine, suggested that medicinal turmeric seemed to relieve the ache for people suffering with knee osteoarthritis, an excruciating and irrevocable ailment, which occurs when cartilage wears down to the bone.

As mentioned in the discover magazine article, researchers at the University of Tasmania, Australia,  allotted 70 people to either a turmeric extract or placebo for 12 weeks.

People in the medicinal turmeric extract group testified a lesser amount of pain than the placebo group on a questionnaire.

Medicinal Turmeric also poses as a potent way to soothe achy knees and sore joints, without the side effects of aspirin and other Non-steroidal Anti-Inflammatory Drugs (NSAIDs).

Curcumin, unlike some NSAIDs, has also been determined to be non-toxic. NSAIDs, such as ibuprofen, taken in excess can be the reason for symptoms that include convulsions, coma, and acute renal (kidney) failure.

According to blog.arthritis.com, curcumin targets unambiguous molecules or trails that regulate cell rotation.

Curcumin found in medicinal turmeric also slabs inflammation-causing cytokines and enzymes, including 5-LOX and cyclooxygenase-2 (COX-2), the target of the drug celecoxib.

This is one of the reasons, why studies are concluding medicinal turmeric is extremely helpful for people suffering with osteoarthritis.  The article by blog.arthritis.com also refers to a study circulated in Molecular Medicine in 2016, which recommends that curcumin may benefit to avert bone erosion in individuals suffering from rheumatoid arthritis.

What You Must Understand?

Turmeric has climbed all the way to the top of the healthy food chain, from 5000 years of cooking to Starbucks menu whipping up golden lattes.

But what one must understand is that you must make the right choice to pick up medicinal turmeric with abundant curcumin, for it to actually display its pharmacological properties and to alleviate the pain.

People have been giving great reviews about Calmya, a product which is promising in providing pain relief, with a copious amount of curcumin. So, choose wisely to stay healthy and lead a life free of aches & pains.