Skin is the largest organ in our body and if we were to open it up, it can cover up to several kilometers in length. Having said so, skin cancer is also becoming one of the leading cancers in the whole wide world. Skin cancers are the cancers are arising in the skin due to the uncontrolled growth of abnormal squamous cells. These rogue cells have the ability to invade or spread to other parts of the body too. There are different types of cancer cells that can arise in the basal cells, squamous cells, or the melanin-producing cells called melanocytes.

Skin cancer mostly appears on the face, neck, arms, hands, etc i.e. the parts of the body that are exposed to the ultraviolet radiations of the sun. What these rays do is that they damage the skin DNA which then eventually manifests into cancer. Some other risk factors associated with skin cancer are severe sunburns, old age, genetics, light-colored skin, freckles, having many large thick moles, and excessive use of the tanning beds. It has also been observed that people with skin diseases like psoriasis and weak immune system are also at high risk of having skin cancer. 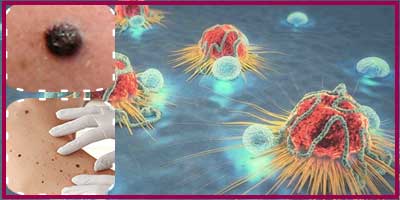 The most common signs and symptoms of skin cancer are the presence of sores, ulcers that don’t heal soon, moles whose appearance changes (become white and waxy lump like) as well as the presence of brown patches on the skin that become scaly and itchy. As we are all aware, the most common form of treatment for skin cancer is chemotherapy and radiotherapy which comes with its own share of side effects.

One of the most effective and proven natural ways of treating as well as preventing cancer is the use of turmeric. Obtained from a plant called Curcuma longa, turmeric is a popular spice used for its vibrant color and aromatic flavor. Since time immemorial, it has been proved that turmeric has great medicinal properties like an antiseptic, analgesic, anti-inflammatory, antioxidant, anticancer, and immune-modulatory. All these properties can be attributed to the presence of the most bioactive compound in turmeric known as curcumin.

Properties of Curcumin which make it Potent in Fighting Skin Cancer 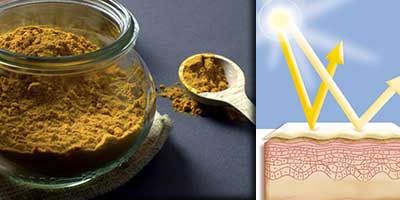 Angiogenesis is the term given to the formation of new blood vessels which helps in supplying more blood to the growing cells. On the flip side, the cancer cells can trigger this process so that the cancer cells get more supply of blood and also spread to the other parts of the body. VEGF (Vascular endothelial growth factor) is said to play a vital role in the development of skin cancer. Curcumin has the ability to inhibit angiogenesis. How does it do that? It inhibits various molecules of the signal transduction pathways which help in the process of angiogenesis.

The antioxidant property of turmeric helps to prevent the damage caused by UV radiation by scavenging the free radicals. Topical application of turmeric has a protective effect on the skin against UV rays as well as chemical-induced skin tumors.

Curcumin also helps to induce apoptosis (cell death) in both types of cancer (melanoma and non-melanoma). It does so by increasing the levels of p53 protein and interfering in various molecular pathways.

It is to be noted that curcumin needs to be started in small doses initially and gradually increase the dosage. Avoid taking it on an empty stomach to avoid any kind of acid reflux. A patch test is advisable before topical application. The use of a good brand of curcumin is of utmost importance for better results.