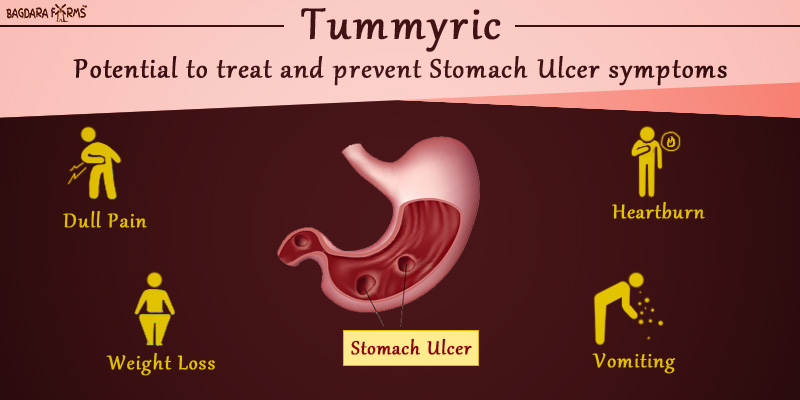 Our lifestyle changes, poor dietary habits, no physical activity and drinking have become a fashion and a life style now days. When the system is not getting proper food, rest, exercise or nutrition, it is bound to create problems internally. Large amount of alcohol cause the stomach to produce too much acid, which may lead to ulcers.

Stomach ulcers are sores in the lining of the stomach or small intestine. They occur when the protective mucus that lines the stomach becomes ineffective. The stomach produces a strong acid to help digest food and protect against microbes. To protect the tissues of the body from this acid, it also secretes a thick layer of mucus.

If the mucus layer is worn away and stops functioning effectively, the acid can damage the stomach tissue, causing an ulcer.

Some stomach ulcers go unnoticed and show no typical indigestion-type pains. These ulcers are less common and tend to be diagnosed after the ulcer has started bleeding.

Some ulcers can cause a hole in the stomach wall.

The ulcers share similar characteristics but are identified by their location in the body.

If the ulcer continues to return, does not heal, bleeds, or prevents food from leaving the stomach, surgery can be the solution and that includes:

But have you ever thought of that instead of reaching to this level, why not to control the root cause behind this stage of body. Why not to avoid drinking alcohol, smoking tobacco, and any foods that trigger this ulcer problem more.

Even with slightest diet changes, Ulcer can be prevented by including Fruits and vegetables, Fiber, Probiotics, Vitamin C, Zinc, and Selenium.

Bagdara Farms Has A Special Formulation Named Tummyric, which prevents and treats all ulcers and stomach related problems organically. Learn How.

Tummyric is a product straight from natures lap and packed into a bottle carrying a rich amount of Curcumin, which is known for its true and miraculous effects in curbing the problem o stomach ulcers and other health problems related to stomach, without any further side effects.

Curcumin in Tummyric has anti-inflammatory properties that may help improve conditions that can cause stomach ulcer. The herb may also offer ulcer-healing benefits not found in effective anti-ulcer drugs (such as omeprazole). For example, curcumin compounds help regulate the enzymes involved in ulcer wounds, reverse cell damage, and accelerate healing. The natural compounds in curcumin could also help resolve ulcers and/or relieve symptoms, without the potentially toxic side effects of synthetic drugs.

Few Of The Properties Of Tummyric That Help In Curing Ulcer Are:

A dietary natural drug (curcumin) could be used to protect and treat the inflammation induced by the ulcer effectors. The biological effect of curcumin to combat these induced pathological disorders is due to its anti-inflammatory and antioxidant activities. Therefore, Tummyric can be used as an antiulcer potent agent.