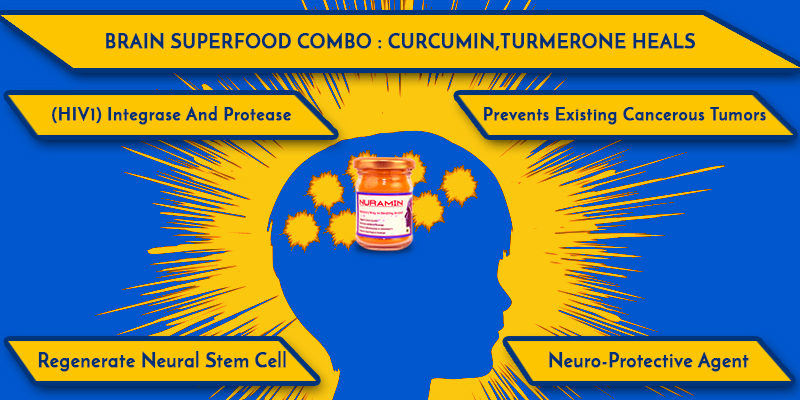 The Human brain is a marvel in itself, performing innumerable functions all at the same time. It controls most of the activities of the body, processing, integrating and coordinating information it receives from the sense organs, and making decisions as to the instructions sent to the rest of the body. The functioning of the brain is a complex process and any hindrance in the brain can hamper the essential and crucial functioning of the rest of the body.

The Curcumin in Turmeric is proven to be a natural antibacterial, anti-inflammatory, analgesic and cancer-killer. Turmerone (ar-Turmerone) is what gives turmeric its smell and flavor and it has been proven to induce neural stem cell proliferation and regeneration. In diseases like Alzheimer’s, the neurons in the brain lose their ability to do their jobs and eventually dies, causing irreversible damage to the brain. Turmerone revitalizes neurons and promotes the creation of new stem cells. Furthermore, the compound promotes cell differentiation to allow stem cells to become new neurons.

The antioxidants in Curcumin have also been found to reverse the damage caused by pharmaceuticals, especially in the treatment of schizophrenia. The commonly-prescribed antipsychotics often cause involuntary muscle movements and severe behavioral changes. As per studies, Curcumin reversed the effects of the motor disorder tardive dyskinesia.

Turmerone is not only a brain healer, it also kills cancer. Various studies have shown that this potent compound not only causes cell death but also prevents existing cancerous tumors from growing by activating proteins in the body that further attack cancer cells.

In a study , researchers from the Institute of Neuroscience and Medicine in Julich, Germany, studied the effects of ar-turmerone on NSC (Neural Stem Cell) proliferation and differentiation both in vitro and in vivo. In vitro rat fetal NSC were cultured and grown in six different concentrations of ar-turmerone over a 72-hour period. At certain concentrations, ar-turmerone was shown to increase NSC  proliferation upto 80%, without having any impact on cell death. The cell differentiation process also accelerated in ar-turmerone-treated cells compared to untreated control cells.

Several substances have been found to promote stem cell proliferation in the brain, but few nutrients also promote the differentiation of stem cells into neurons, which constitutes a major goal in regenerative medicine. Aromatic turmerone takes us one step closer to achieving this goal.

Curcumin is capable of crossing blood-brain barrier, which is one reason it is a good neuroprotective agent. It may also help inhibit the accumulation of destructive  beta-amyloids in the brain of Alzheimer’s patients as well as break up existing plaques. Curcumin plays a vital role in improving Parkinson’s  disease and stroke damage.

Curcumin Has Been Shown To Directly Interact With:

In case of a Stroke, Curcumin may help limit the damage that sometimes occurs when the blood and oxygen return to the brain tissues after the stroke.

The age-old miracle cure in the form of Curcumin and Turmerone is medically backed and its benefits are endless. It’s time to take your health and those of your near and dear ones in your own hand. To reap the benefits it is essential to use pure unadulterated Turmeric with high levels of Curcumin and Turmerone, free from any harmful chemicals. And that is why; you should go for a trustworthy brand that assures the quality of its products along with its effectiveness. Nuramin is a product of Bagdara Farms, grown and processed organically by using the highest standards of manufacturing. It is free from any pesticides or harmful chemicals. Take one small step towards brain health today, for a better tomorrow.